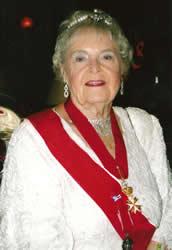 Our Legend, Her Legacy

“GIVE WHILE YOU LIVE, SO YOU KNOW WHERE IT GOES.”
“I’M AN AMERICAN BY CHOICE”

Henrietta, Countess de Hoernle, 103, of Boca Raton, Florida passed away on Friday, July 22, 2016.  With her passing, a dynamic, self-effacing, yet elegant voice for those in need has been stilled in Boca Raton and throughout Palm Beach County.  The Countess’ legacy of philanthropy will live on into eternity.

Born to musician parents (George and Theresa Rach) in the German Black Forest town of Karlsruhe on September 24, 1912, the Countess came to America in 1931 to live with her grandparents in the Jackson Heights neighborhood of Brooklyn. For the rest of her life, the Countess would share her love and patriotism for her adopted homeland with all: “I am proud to be an American…by choice!”

Following her arrival in the United States, the Countess became active in The Liederkranz CLub, a Manhattan social club founded by German-Americans to promote social interaction and instrumental music. There, she met her first husband, Karl Heinz Bisping, with whom she had one daughter, Diana Gass who currently resides with her family in Yorktown Heights, New York. Following Karl’s tragic death in an accident, the Countess married Jeff Gass, who died in 1949 from the malaria he contacted while serving in the South Pacific while in the U.S. Army during WW II.  Henrietta and Jeff had one daughter, Carol Wagman who resides in York, Pennsylvania. 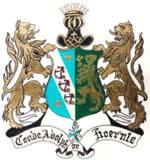 In 1950, the Countess met businessman and engineer Adolf, Count de Hoernle at a Liederkranz masquerade ball. Together, Adolf and Henrietta would spend the next few decades transforming every community in which they lived by their generosity and humanitarian spirit. Soon after marrying, Adolf and Henrietta moved to Bronxville, New York, where the Countess began volunteering at the Lawrence Hospital thrift shop. She also began to volunteer for the local “Meals and Wheels” program. As her volunteerism increased, Henrietta noticed many plaques in the charities she served, acknowledging major contributions. She encouraged her husband to follow their example, and a legacy of giving was created. From those humble charities in Westchester County, New York, down to Boca Raton, Florida, for the next sixty years, the name “de Hoernle” became synonymous with generosity, love, compassion and patriotism.

After selling his company (Stewart Stamping) in 1965, the Count and Countess traveled the world, until they eventually settled in Boca Raton in 1981. The history of Boca Raton would never be the same. Their commitment to local philanthropy was unequaled, as the Count and Countess lent their flame and their resources to numerous charities in Boca Raton and the surrounding area. Hospitals, universities, soup kitchens, and historical points of interest have all been touched by the generosity of these two incredible individuals.

In addition to her work with the Order of St. John of Jerusalem on behalf of the sick and the poor, the Countess served on over 30 charitable boards in her lifetime, and has her name on 40 non-profit buildings in Boca Raton alone!

With each passing year, the Countess continued to astound family and friends with her vibrant spirit and robust health. Until her last breath, her every waking thought was the care of others. Still seeking out ways to support local charities, the Countess took the stage at the concert in honor of her 103rd birthday and, with humility, humor and passion, encouraged the audience to follow her example. As she so richly illustrated throughout her life, Henrietta, Countess de Hoernle told her audience “Giving begins at home, and this community is our home.”

Henrietta, Countess de Hoernle held titles of grace…and was truly a true woman of grace. A gentle voice…but a voice filled with compassion and love. A driving visionary for social justice and mercy whose life was spent serving the sick, the poor, the lonely, and the veterans who served our country. Henrietta, Countess de Hoernle was the very icon of the philanthropist who sought to change the world…and she succeeded. Her generosity provided the bricks that built so many charities in the local area…but her loving spirit was the mortar that held that community together. Her passing is mourned by the entire community.