The Order of St. John of Jerusalem, Knights Hospitaller (Malta) under royal charter of his late majesty King Peter II is one of the oldest orders of Chivalry in existence and has raised funds to benefit the sick and the poor of the world since 1048.  The international headquarters, called The Grand Magistry of the Order, is located in Valletta, Malta.

The Order of St. John of Jerusalem Knights Hospitaller of Florida, Inc. under the leadership of Commander Isabelle K. Paul, DCJSJ is a non-profit, charitable, 501-(C)(3) tax-exempt organization headquartered in Boca Raton, Florida.  The late Henrietta, Countess de Hoernle is the patroness and holder of the Order’s Grand Cross of Justice, Medal of Merit and Cross of Merit.  The OSJ Commandery of Florida consists of 42 members dedicated to the Order’s charitable and humanitarian objectives.

The history of the Order is unique and profound.  The Order is famous and revered for its countless works of mercy and charity performed unceasingly by its members since the days of its founding in Jerusalem by the Blessed Gerard in 1048 AD as a Beneidctine nursing Order and, thereafter, as a Christian military order under its own charter charged with the care and defense of pilgrims to the Holy Land.

Historically, The Order of St. John successfully defended Europe from the terror, encroachment, and often massive invasions of various empires.  Without question, the Order of St. John played a major role in the preservation of Christianity and, indeed, Western Civilization.  The Order is well-known for the establishment and operation of the first and finest hospital ever known to mankind; the great sacrificial devotion of its early members as a religious order; for its loyal and constant defense of the Christian faith; and for its astounding military exploits over several centuries.

Today, it is a spiritual home to over 1,200 knights and dames in more than a dozen countries who are dedicated to finding the resources to serve all of humanity in the name of Christ.  The organization now operates worldwide through its many local non-profit entities, each established under the laws of their respective countries.  Each unit carries out its own programs of humanitarian projects through its charitable trusts, while promoting additional good works undertaken by the international Order, other worldwide units and, separately, by supporting the Hospitaller (charitable) causes of individual members.
The Order’s motto Pro Fide, Pro Utilitate Hominum means “For Faith, For Service to Humanity” serves as a member’s moral compass and is upheld by all OSJ members while they strive to serve Christ’s sick, poor and the need worldwide to the best of their ability.

The aim of the Order of St. John of Jerusalem, Knights Hospitaller is to bring together ladies and gentlemen who are already known for their love of humanity and who are – and will continue to be – contributors to the good of their communities.  To become a member of the Order brings with it the highest honor and responsibility for carrying on the centuries-old history and traditions of the OSJ. 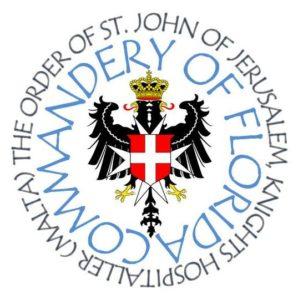 The Order of St. John is first and foremost an Order of Knighthood.

Although in the 21st Century it is best known by its focus: the care of the sick and the poor through humanitarian and charitable actions of its members, it is not a club or a civic organization that one can join.

A person invited to membership in the Order of St. John is invited to accept the accolade of knighthood because he or she has already demonstrated a life’s commitment to the Christian faith and to the care of the sick and poor.

Candidates for knighthood are first invited by two existing members of the Order who serve as guarantors and as orientation guides through the candidate’s period of Aspirancy, which is typically a six-month period that involves the candidate in learning about the work of their Commandery and Priory.  During this time, a candidate is able to examine the work of the Order and the Order examines the background and dedication of the prospective Aspirant.

At the end of this period and following the mutual decision to extend and to accept the accolade, the candidate is inducted as an Aspirant to the Order and prepares to receive full membership in the Order of St. John as a Knight or Dame of Honour in a Solemn Ceremony of Investiture.

The Order provides that each unit should judge of the qualifications of the members who may be proposed in a manner consistent with the mandates contained in Order’s Charter and Constitution.  The basic qualifications of membership are further illuminated in the Priory’s and Commandery’s standard operating procedures as: